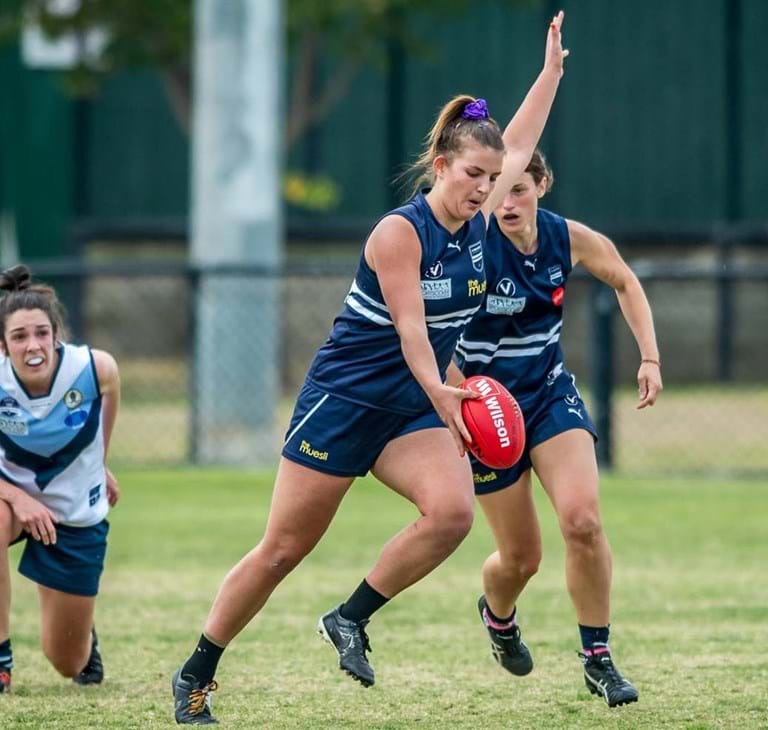 We couldn’t have asked for better conditions at home for Round 2 this weekend.
Without a breath of wind at the usually gusty Pressure Park, the girls were excited to take on Old Camberwell, still riding the adrenaline from last week’s win.
It was a perfect day for football, however both teams had their work cut out for them from the beginning with only one field umpire for both games and a lot of missed calls, resulting in messy and inconsistent play.
The Fields had a slow start to the match with Sarah Guest kicking our only goal in the first term.
Sarah is an exciting recruit for the Fields in 2019, with one of the strongest bodies and safest hands our forward line has seen in a long time, we are looking forward to her making a big impact at full forward this year.
Old Camberwell ran away from us early, with their impressive marking and quick ball movement which allowed them to kick 4 goals resulting in a 3 goal lead at the first break.
Our backline dominated again and led by Issy Thomas and Montana White, started to really put the pressure on from the second quarter.
We kept Old Camberwell to two goals in the second term while Kate Macqueen booted a monster goal home from 45m out to keep us in contention, we ended the half trailing by 4 goals.
We started the second half with a lot to prove, we knew we would have to give it everything for these last two quarters and give ourselves as much of an opportunity as possible to convert.
Jess Harley’s impressive goal straight out of the middle early in the third term set the tone for the rest of the half.
The girls were ruthless and picked up the intensity throughout the midfield, applying the pressure that had been missing in the first.
Our backline stepped up even further in the third, keeping Old Camberwell goalless and closing the gap back to 3 goals by three-quarter time.
The Fields kicked two quick goals, a swift toe poke over the line from the ever tenacious Georgie Phillips and a solid goal from captain Toni Hamilton came early in the fourth quarter for the Fields and brought us within a goal of Old Camberwell.
The atmosphere was incredible and we could sense our opponents were becoming increasingly concerned as we continued to dominate in the back line, increasing our consistency with clearances out of the midfield into space and keeping composed and in possession.
One last goal from Old Camberwell in the fourth put the margin at 11 points and with only two minutes to go Sami Stewart took an incredible mark in the goal square, while copping a solid whack to the head, and kicked the goal to bring us within a goal.
The umpire had finally found his whistle for the last 90 seconds of play and we were held up in the middle for five ball ups with neither team able to get a clearance as the time got away from us and the game ended with the Fields falling five points short.
We’ll get them next time.